Welcome to the inaugural post of the Mech language blog, where I will be documenting my work on the language as I go. In this first post, I will just talk a little about what the language is for, and where I’ll be taking it in the near future. You can also follow Mech’s development on Twitter (@MechLang) or by signing up for the mailing list.

First, I have a small robot car platform with several sensors, including a Kinect 2 and a 9-axis AHRS. These sensors stream 3D depth information about the environment, and 9D orientation information about the robot’s pose. On-board processing of this data is handled by a standard AMD x86_64 CPU.

Next, I have a tablet to which I would like to stream data from the robot. The tablet will display the sensor data, transform and filter it, and send it back to the robot. The final piece of the system is a server, which will host long-running computations like SLAM or neural net model training. The server can communicate with the tablet or the car directly. In summary, the system looks like this: 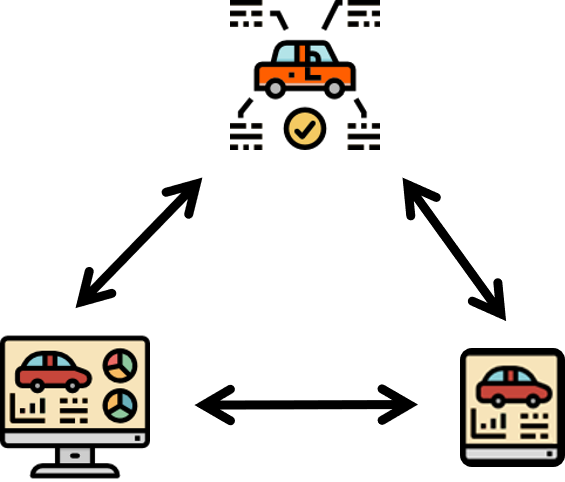 Mech is therefore a platform that allows me to work with the system described above with the minimum amount of coding. The platform should handle all the heavy lifting in terms of connecting to devices, shuffling data around, providing transforms and visualizations, and it should all be fast enough for a robotics-focused application.

(At this point many of you may be tempted to make a list of various technologies or platforms that when cobbled together could facilitate such a project. I’ll detail it in another post, but I’ve already built an off-the-shelf system that I ultimately found wanting. That’s the reason I’m building something from scratch.)

We used to do something at Eve where we would imagine a sci-fi future where we had cool computing tools. What kinds of things could we do with those, that we couldn’t do today? By imagining this future that didn’t exist in explicit terms, we could work backwards and figure out the necessary technologies to make that fiction a reality. I’m going to do the same thing here, phrased as two lists: things that an idealized Mech makes trivial, and things that it makes impossible [1]. Here’s a chance for us to think big and imagine a future where anything is possible.

Mech makes it trivial to…

Mech makes it impossible to…

Coming from today’s programming language landscape, the above may seem more on the fiction side of things. But it is my hypothesis that all of the above will be achievable with Mech, made possible by the greenfield approach we’re taking. As I’ll show in the coming blog posts, some of the decisions we make up-front about the semantics of the language will have major implications down the road on what we can achieve with tooling.

Hopefully now you have an idea about the spirit of Mech. This post was really about the motivation for building it and what I hope it will become one day. I hope it was enough to convince you to follow along as we build this language. In the next post I’ll talk about specifics of Mech, in terms of its architecture and the implementation as it stands so far.

[1] When I worked on it, I was responsible for talking about the Eve language to outside audiences, so I’ve spent a lot of time thinking about how people talk about programming languages to one another. This is the first time I’m trying this method, but I like it for a couple reasons. First, by talking about what the language makes trivial or impossible, we recognize that implicit in the design of a language is a set of tradeoffs, and we highlight the implications of the design decisions we felt were most significant. Further, a reader of these lists isn’t left to wonder how a feature may impact their work. Programming languages are often first presented as a list of supported features, frameworks, or programming paradigms, leaving the user to decide how e.g. “trait-based generics” impact their work.